According to Omnet++ Wikipedia page:

OMNeT++ (Objective Modular Network Testbed in C++) is a modular, component-based C++ simulation library and framework, primarily for building network simulators. OMNeT++ can be used for free and non-commercial simulations like academic institutions and for teaching purposes. OMNEST is an extended version of OMNeT++ for commercial use cases.

INET also offers a set of mobility models to simulate the node movement in simulations. The INET models are licensed under the LGPL or GPL.

Since I’m planning to explain OMNETPP therefore I just copy and paste most of the materials which you need from this link. The idea is only to present this information in another way.

Overview of the OMNeT++ IDE 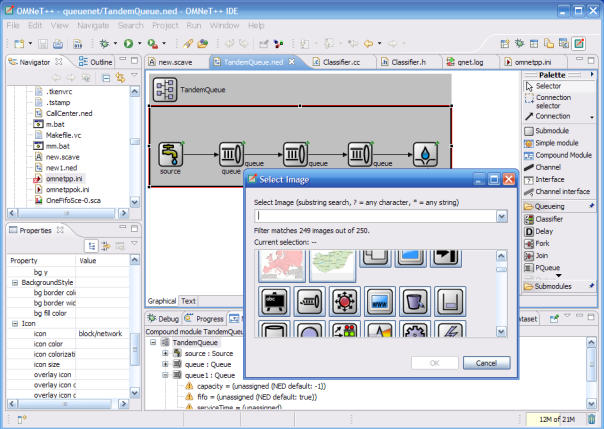 The main ingredients of OMNeT++ are:

The INET Framework can be considered the standard protocol model library of OMNeT++. INET contains models for the Internet stack and many other protocols and components. The INET Framework is maintained by the OMNeT++ team for the community, utilizing patches and new models contributed by members of the community. Several other simulation frameworks take INET as a base and extend it into specific directions, such as vehicular networks (Veins, CoRE), overlay/peer-to-peer networks (OverSim), or LTE (SimuLTE).

You can find a list of selected OMNeT++ models and model frameworks here.

The OMNeT++ simulation kernel is standard C++ and runs basically on all platforms where a modern C++ compiler is available. The Simulation IDE requires Windows, Linux, or macOS.

You can find the documentation of OMNETPP here and get started here. In the next post, I’m going to explain how to install OMNETPP on Ubuntu 18.04 LTS step by step.

If you are looking for the list of other simulators that they are good enough for Edge/ Fog/ Cloud Computing and IoT you can find it in the link.